THE KELP FOREST SAVIOURS AND THEIR ECOSYSTEM.

An ecosystem is a set of environments. Different living beings and nonliving elements interact with each other and when one species disappears, others in turn may disappear because the balance has been disrupted.

But all this may be quite difficult to follow.

That’s why I’m going to tell you about sea otters who are becoming the saviours of kelp forests, also known as varech forests.

This species is essential to rescuing this underwater forest as without them, the entire marine ecosystem would collapse.

Why is it so important to save kelp forests?

Kelp is a giant seaweed that forms huge aquatic forests located north of the US Pacific Coast and sub-Arctic New Zealand and Asia.

Anchoring to rocky sea beds, they rise up to the surface and are able to grow to more than 50 metres in length.

Kelp is very special as it fights against global warming by absorbing nitrogen, phosphorus and CO2. And that’s really something! Our planet should be saying a big thank you!

All kelp forests are home to a rich diversity of sea life including shellfish, sea urchins, crabs and fish. All living entities.

But of all these inhabitants, sea otters are the most important as they act as guardians for this marine ecosystem.

And for good reason as when sea otters were hunted predominantly by Man for their fur, their extinction caused a disaster in the forest ecosystem, leaving behind a huge army of voracious sea urchins destroying everything in their path. There was nothing left alive!

But fortunately, the situation has changed. Sea otters have been classified as a protected species and hunting them has been banned.

So they have returned to the kelp forests and put everything back as it should be. And do you know how? Well, you’re going to laugh. It’s because they love eating sea urchins. They’re a real treat for them!

Now that there are fewer sea urchins, kelp forests can at last breathe, blossom and return to a balanced ecosystem. Life begins again! 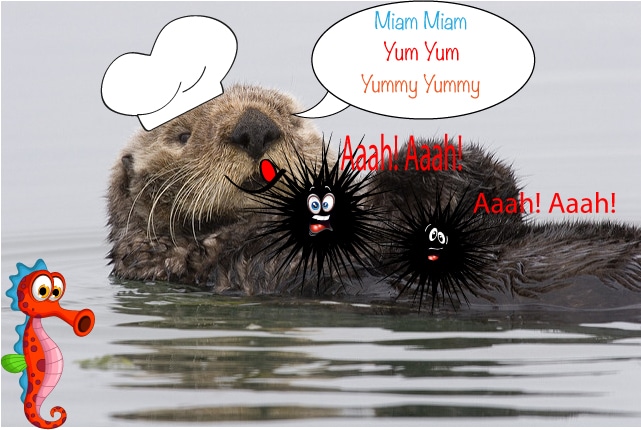 The sea otter has been an endangered species, hunted relentlessly for its fur. It almost disappeared. But fortunately, today, the sea otter is protected. It has been classified among the species in danger of extinction by the IUCN (International Union for Conservation of Nature). (in capitals)

The sea otter is the smallest mammal in the world. It is primarily an aquatic animal. It measures between 110 cm to 130 cm and weighs on average 23 kg for females and 30 kg for males. It lives to around 15 to 20 years old.

Sea otters love to float on their backs to eat and relax. And when it’s time to go to bed, they wrap themselves around algi or cling to one of their mates to avoid drifting off while they’re sleeping. Clever!!

They have to eat a lot to fight against the cold.

Their diet mainly consists of crabs, mussels, fish and, of course, the famous sea urchins that they love so much!

Thanks to their flat, wide teeth, eating all that shellfish is a breeze!

Despite the freezing temperatures of the water where they live, they don’t have any layers of fat to insulate themselves. However they do have a thick, oily fur that protects them.

Their back legs and tail are flat, which makes them able to swim swiftly and accurately. There is a pocket on their forearm under their front legs that is used as a “grocery bag” to temporarily store food they collect while out hunting. They also use it to collect stones, an indispensable tool for opening sea urchins.

They are capable of diving to depths of 45 metres. 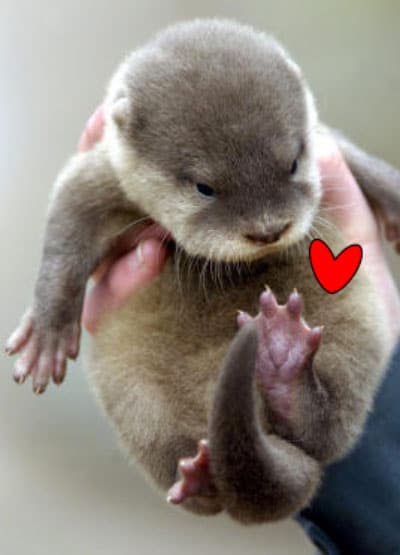 There is no specific breeding season.

At the age of 3, the sea otter can become a mother of 1 or 2 pups who need to be kept warm for about 4 to 6 months. At birth, the newborn weighs between 1.5 kg and 2 kg with eyes already open and a thick fur that allows them to naturally float on the water. Their mum teaches them how to dive and hunt. They usually stay with their mother for 6 to 8 months and then they venture off on their own.