THE POLAR BEAR, ALSO KNOWN AS THE WHITE BEAR AND URSUS MARITIMUS (in Latin for the eggheads).

Originally, the bear is a close relative of the panda; it’s not LEE who says so, but certain books. Studies show that the polar bear comes from the Arctic regions; he is the master of the Far North and a formidable predator.

Its fur consists of two types of hair, one fine and woolly and close to the skin that keeps it warm, and the other which allows the polar bear to shake off excess water easily after an escapade in the icy water, drying off by rubbing itself in the snow.

Polar bears do not have white hair; it is actually translucent. It is the reflection of light that gives it its white colour. Its fur also insulates it, meaning it cannot tolerate a temperature above 10°.

The colour of its skin is also surprising; it is black in order to preserve a maximum amount of heat, not forgetting that its thick layer of fat helps with this.

How does a mass weighing several hundred kilos move about across a thin layer of ice only a few centimetres thick?

It’s rather amusing and impressive to see it slide with caution; it distributes its weight as evenly as possible, even crawling to avoid breaking the ice- now that’s smart, considering that it can reach a weight of up to a tonne for the males and two times less for the females. Standing, the polar bear reaches a height of around 3,30 metres!

It is an excellent swimmer with the same technique as a dog, with the help of its webbed front paws and his hind feet and legs, which are used as rudders.

Its layer of fat also helps it to float, whilst protecting it from the icy waters.

It is also capable of swimming breaststroke, the one that we know! Incredible! 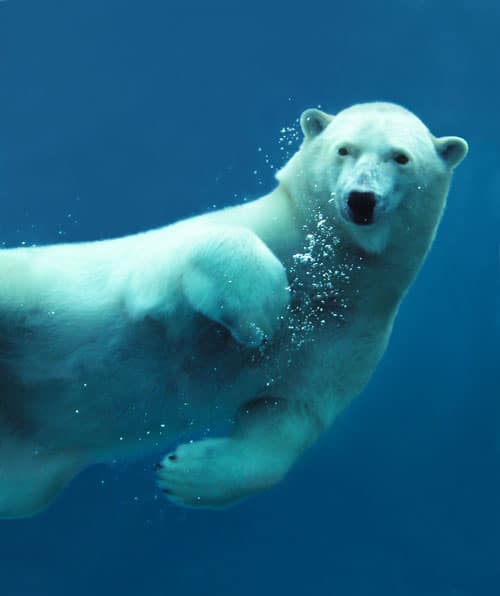 The polar bear is a semiaquatic marine mammal, whose survival depends above all on the ice floes. However, even though the polar bear has adapted to its environment, it is also a victim of it. Any variation to its ecosystem brings with it a threat to its survival.

The polar bear mates in springtime, aged between 3 and 5 years old and every 3 years, as during this time the cubs need to grow, to be protected and to learn how to hunt with their mum.

After 7 to 8 months the cubs are born; they are blind, deaf and hairless, weighing between 500 and 900 grams.

The polar bear has a black snout that can be easily spotted in the middle of the ice floe, but when it’s ready to attack a seal it hides it underneath one of its paws- clever right? – to maximise its chances at getting a good meal.

It has an extraordinary sense of smell, capable of smelling the presence of a seal (its favourite meal) at over 20 kilometres away, or of finding it hidden underneath the ice. The smell of a whale stranded within a radius of over 30 kilometres is child’s play for him.

They like to have fun, and enjoy play-fighting- it’s a game for them! 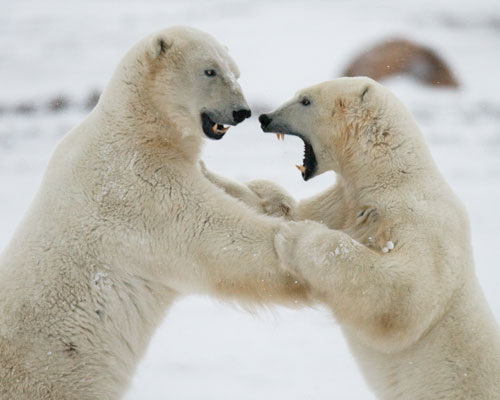 After hibernating in snow dens with a temperature of 0°, without eating or drinking, and feeding her young, the mother bear comes out of her den in the springtime with a tiny waist as she’s lost half of her weight. Wow!

It’s true that the polar bear only thinks of one thing- eating. To do so, it is capable of walking over 40 kilometres per day, which adds up over a lifetime to a distance of around 260,000 kilometres covered; it’s crazy right?

To hunt a seal, the smart polar bear settles beside a hole in the ice that a seal needs to dig in order to come and take breath, and then he pounces, giving his prey a violent blow with his paw to knock it unconscious. 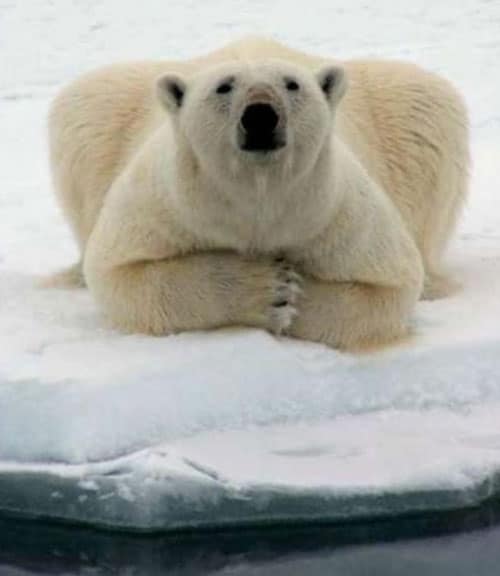 The biggest threat is global warming, as it creates less ice floes and ice patches.

The extent of its territory is reduced and its survival threatened.

The ice floes are vital for them, as this is where they both hunt and reproduce.

Due to the melting of the ice floes, its hunting season is cut short, which is problematic as they aren’t able to store enough fat to spend the winter in perfect safety.

It must also be understood that if the female hasn’t got enough food, it will be difficult for her to have babies as her energy requirements will be insufficient, for nursing her young too.

The hunting of polar bears kills around 1000 per year.

Sea pollution is also an aggravating factor (the exploitation of oil, gas and toxic waste). The bears don’t escape this poisoning, their dietary staples coming from the sea, and this puts their immune and hormonal systems at risk. Last but not least, tourism also causes damage… ships and rubbish included.

WWF is an international non-governmental organisation, which informs us of a new Marine Protected Area in Canada for the benefit of many species, including the polar bear.