Their cries resonate across the planet

An elephant is killed for its ivory every 15 to 25 minutes, equivalent to around 30,000 slaughters per year.

The prohibition of the international ivory trade dates back over twenty years, but the results are still catastrophic. The demand for ivory is as strong as ever and poaching continues apace.

Poaching is an illegal method to kill endangered species, with elephants and rhinoceroses being the primary victims.

Ivory, in particular, represents a great source of wealth for poachers.

In fact, China has taken action to stop the slaughter of elephants, having prohibited trading in ivory since 1 January 2018.

The Chinese are big fans of ivory. It is both a cultural artefact and a medicinal ingredient, and has been since the dawn of time.

Many well-known artists, such as the actress Li Bing Bing and the world-famous basketball player, Yao Ming have become involved with the cause.

The Chinese government also wanted to send a powerful signal to the entire world, by burning a stockpile of several tonnes of ivory, with the fire being broadcast on the TV news.

Another important threat for elephants:

Loss of habitat, in favour of different construction projects such as roads and dams, is endangering the lives of elephants.

In Asia, the human population is invading the areas where elephants live. Unfortunately, people and elephants do not make good neighbours. Elephants destroy the human harvests and people kill the elephants to protect themselves.

In Africa, they are still being killed – quite legally – for people to eat their meat in stews, as steaks, or from tins that are sold in tourist shops. This is the sad reality.

And that’s not all!

In Burma, elephants’ skin is worth its weight in gold, as it is used in a new, fashionable treatment.

The skin, which has already been burned (and is therefore ash) is mixed with coconut oil to obtain a remedy that cures eczema.

Another case that is just as incredible is a paste, made from elephants’ teeth, used to remove blackheads from the face. Where are we going? It’s truly stupefying! The number of elephants has halved in a decade.

Despite, hunting endangered species in Burma is illegal – but the problem is that the fine is just sixty dollars, which is not significant to the poachers.

The WWF Charity has responded, in the face of this problem, by deploying teams of well-trained, well-equipped guards who are tasked with defending the elephants. As such, the WWF hopes to save Burma’s elephants and prevent them from dying out altogether. 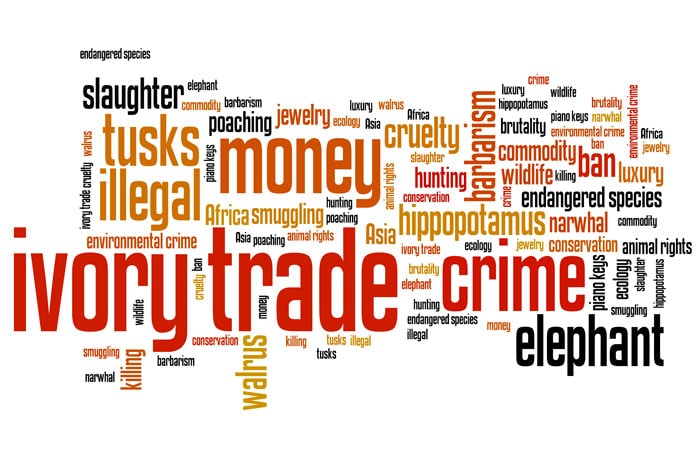 HOW CAN THE ELEPHANTS BE SAVED?

There are charities, thanks to which, elephants have a chance at survival. Here are some examples:

IFAW is an important charity for elephants, which calls on people who have ivory goods to donate them so that they can be destroyed, helping to put an end to poaching.

The National Geographic Society, which is highly active, pairing with African charities to secure and preserve some national parks for the sake of the elephants.

They deserve our thanks.

At our own level, we can donate to charities, raise awareness by talking to our friends and family, and encourage people not to buy ivory under any circumstances. It’s quite simple: if there is no longer any demand for ivory, elephants will finally be able to sleep soundly – and so will we!

Do zoos represent a new hunting ground for poachers? Vince, a white rhino belonging to Thoiry Zoo, near Paris, was shot in the head three times during the night of 6 March 2017. He was a young male, aged four years.

The poachers used a chainsaw to take his main horn and left with their bounty – worth 50,000 euro – under their arms while leaving Vince the rhinoceros to die in his enclosure.

It was particularly shocking to learn that rhinoceros horns are made from keratin proteins, just like our own nails. No doubt you will ask me why this happened.

It is because, in this world, there are people who believe that rhinoceros horn treats a number of “diseases” even though you know full well that our nails don’t cure disease – they are just a physical protection for our fingers.

“No one has two hearts – one for animals and another for human beings. You either have a heart, or you don’t.”